1985'S SELF-TITLED ALBUM, 1979'S MAKING A NAME FOR MYSELF AND 1970'S A TRIP IN THE COUNTRY AVAILABLE FRIDAY, MAY 27th FOR STREAMING AND DOWNLOAD VIA CAPITOL NASHVILLE/UMe

LOS ANGELES , May 26, 2022 /PRNewswire/ -- Over the course of his wildly successful four-decade long career, Country Music Hall of Famer, Roger Miller, recorded and released hundreds of songs across 19 studio albums, including a remarkable 52 singles. Best known for his chart-topping hits "King of the Road," "Dang Me," "Chug-A-Lug" and "England Swings" from the mid-1960s Nashville sound era, Miller released his debut album, Roger And Out, in 1964 on Smash Records after several years of playing with, and becoming a hit songwriter for country greats like George Jones, Jimmy Dean, Ray Price, Ernest Tubb, and Faron Young, along with releasing a dozen singles of his own. On the strength of the back-to-back hits "Dang Me" and "Chug-A-Lug," the album was a smash and set the stage for a peerless career that included 11 Grammy Awards, two Tony Awards, Academy of Country Music's Pioneer Award, multiple hit records, several movie soundtracks, a television show, induction into Nashville Songwriters Hall of Fame, and so much more. 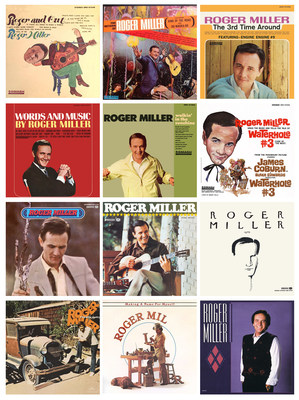 The year 2022 marks 65 years since Roger Miller first burst onto the Nashville songwriter's scene in 1957 with his big break when then-rising country star George Jones recorded and released "Tall, Tall Trees," which they co-wrote together on a road trip to Texas. Nearly 40 years later, and three years after Miller tragically passed away following a short battle with lung cancer, Alan Jackson had a No. 1 country hit with the song in 1995, the year Miller was posthumously inducted into the Country Music Hall of Fame.

To honor Miller's life, legacy, and timeless music, Capitol Nashville/UMe will be making several of his classic albums originally released on Smash Records, Mercury Records, and MCA Records available digitally for streaming and download for the first time ever. Beginning tomorrow, Friday, May 27th, three albums will be released once a month throughout August, starting with 1970's A Trip In Country, Miller's recordings of hit country songs he wrote for George Jones, Ernest Tubb, Ray Price and others; 1979's Making A Name For Myself, featuring his single "The Hat" which he memorably performed on "The Muppet Show," and 1985's eponymous Roger Miller, featuring his recording of "River In The Rain" which he wrote for the seven Tony Award-winning play, "Big River;" and his last-ever single, "Some Hearts Get All The Breaks."

All albums will be available here:
https://stream.lnk.to/RogerMiller

"I'm excited that these classic albums of Rogers are being made available digitally for all to enjoy," said Miller's widow, Mary Miller. "As I revisit his wonderful catalog of songs, I'm reminded how much I like hearing his lighthearted ones like "Hey Would You Hold It Down?" as well as how poignant his ballads are. I hope these songs bring you a laugh, a tear, but most of all, a smile."

In all, 12 albums will be made available throughout the summer months, including three of Miller's biggest records: 1964's Roger And Out (later to become known as Dang Me) and 1965's The Return Of Roger Miller and The 3rd Time Around. Miller's Gold-certified debut, Roger And Out, made him a household name with his first No. 1 country song and Top 10 pop crossover hit, "Dang Me," which along with the hit single, "Chug-A-Lug," garnered him his first five Grammys, including Best Country Song; Best Country and Western Recording, Single; Best Country and Western Performance, Male; Best Country and Western Album; and Best New Country and Western Artist. His 1965 follow-up, The Return Of Roger Miller, also quickly went Gold on the power of his signature song, "King of the Road," the Top 40 hit "Do-Wacka-Do," and the beloved novelty tune, "You Can't Roller Skate In A Buffalo Herd." In addition to "King of the Road" hitting the top of the Country and Adult Contemporary chart in the U.S. and No. 4 on the Billboard Hot 100, it also went to No. 1 in the UK, and was awarded five Grammys in both the "Country" and "Rock 'N Roll" categories; the album, meanwhile, took home the Grammy Award for Best Country and Western Album. Miller's third LP and second of 1965, The 3rd Time Around, continued his ascent to pop and country stardom giving him a No. 1 country album, that also soared to No. 13 on the Billboard 200, as a result of the four unforgettable singles: the Top 10 crossover hit, "Engine Engine #9," and the country Top 10 hits, the "One Dyin' And A Buryin'" and "Kansas City Star," plus the melancholy "The Last Word In Lonesome Is Me," which went on to become a hit for Eddy Arnold the following year and a decade later became a surprising hit for football great Terry Bradshaw.

The digital album releases will also include Miller 1966's Words And Music, with the four notable singles "Husbands And Wives," which peaked at No. 5 on the country chart and No. 26 on the Hot 100; the Top 20 hit, "I've Been a Long Time Leavin' (But I'll Be a Long Time Gone);" and the tracks "My Uncle Used to Love Me But She Died" and Miller's take on Elvis Presley's "Heartbreak Hotel;" his two albums from 1967, Walkin' In The Sunshine, with the top 10 country title track; and Waterhole #3 (Code Of The West), the soundtrack to the James Coburn-starring Western comedy film of the same name which saw Miller collaborating with jazz composers Dave Grusin and Robert Wells for an orchestrated pop-western style exemplified in the Top 200 crossover hit, "The Ballad of Waterhole #3 (Code of the West)."

The releases will be rounded out with 1968's romantic-themed A Tender Look At Love, featuring Miller's covers of songs like "By The Time I Get To Phoenix," "Gentle On My Mind," and the Top 10 country hit, "Little Green Apples;" and his 1969 and 1970 self-titled albums, which continued his rein on the country charts, peaking at No. 20 and No. 33 respectively. The 1969 record features the Kris Kristofferson-penned classic, "Me And Bobby McGee," before Kristofferson, Kenny Rogers or most notably, Janis Joplin, recorded their versions. The song peaked at No. 12 on the country chart and was one of three singles, joining "Vance" and "Where Have All The Average People Gone," as Top 20 country hits from the album. Roger Miller 1970 includes the Top 40 country single, "The Tom Green County Fair."

For a list of all the albums and the dates they will be released see the schedule below.

Three decades after his passing and more than six decades after releasing his first song, Roger Miller's music remains beloved by fans of cleverly written country, honky-tonk and pop and continues to influence generation after generation of songwriters and performers. Country greats Alison Kraus, Alan Jackson, Brooks and Dunn, and Randy Travis all had hits with his songs, and a who's who of artists from across the musical spectrum have recorded his songs, including Ringo Starr, Dolly Parton, Willie Nelson, Kacey Musgraves, Eric Church, Brad Paisley, REM, Huey Lewis, Rodney Crowell, She and Him, Lyle Lovett, Cake, Dwight Yoakam, Alison Kraus, Toad The Wet Sprocket, actor John Goodman, Colter Wall, and Shooter Jennings, a testament to his undying influence and love amongst the music community.

As All Music exclaimed, "Roger Miller was in fact one of the finest country songwriters of the '60s and '70s, and an important influence on the progressive country movement. Blending country with jazz, blues, and pop, he utilized unusual harmonic and rhythmic devices in his sophisticated songcraft, creating timeless, widely covered gems ('King of the Road,' 'Husbands and Wives') that have been tackled by everyone from Dean Martin to Giant Sand." And now his finest albums will be available for all to enjoy in full however one listens to music.

ABOUT ROGER MILLER
A songwriter, singer, guitarist, fiddler, drummer, TV star, humorist, honky-tonk man, Broadway composer, and perhaps above all else, one of the wittiest personalities in country music – Roger Miller was all of these and more.

Known for his chart-topping hits "King of the Road," "Dang Me," "Chug-A-Lug" and "England Swings," all from the mid-1960s Nashville sound era, Miller continued to record and tour internationally into the 1990s, charting his final top 20 country hit "Old Friends" with Ray Price and Willie Nelson in 1982.

With a diverse career spanning beyond music, he was the first artist to have his own prime time variety show, "The Roger Miller Show," which aired on NBC from 1966-1967. Miller also wrote and performed several of the songs from the 1973 Disney animated film "Robin Hood." Later in his life, he wrote the music and lyrics for the 1985 seven Tony Award−winning Broadway musical "Big River," in which he also acted.

Revered by his peers and recognized as a standard bearer by the generations of singer/songwriters to follow him, his legacy stands the test of time. His hits continue to be re-recorded in homage, including Alan Jackson with "Tall, Tall, Trees" and Brooks & Dunn recording "Husbands and Wives."

July 29
Waterhole #3
Walkin' In The Sunshine
Words and Music