Uterine Fibroids are benign growths that can occur in the uterus, affecting one in five women between the ages of 30 and 50.

These growths can enlarge the uterus and cause heavy cramping and painful periods.  Some other symptoms include pelvic bulk symptoms, such as feeling heavy or bloated; pain with intercourse; and bladder symptoms, such as urgency or constant urge to urinate.

One of the treatments offered at Guthrie to treat these growths is a minimally invasive procedure called Uterine Fibroid Emolization.

Uterine Fibroid Emolization is a procedure performed through a tiny needle hole, either in the thigh or the wrist.  Dr. Sima Banerjee of Interventional Radiology at Guthrie said it involves very, very thin catheters and wires put into the artery.  “As thin as a strand of your hair,” said Dr. Banerjee.

Once those wires and catheters are put into the uterine artery, tiny beads are inserted. These tiny beads close off the blood supply to those fibroids and they shrink and die, due to lack of oxygen and blood.

Because there isn’t any cutting involved, the risk of infection for the procedure is low.

“Typically, women will say they have cramping, period-like pains for about five days,” said Dr. Banerjee, “which is managed with oral medication.  But after that, it’s just back to normal.”

Patients will be able to go home the same day and can return to normal activities.

“About a month after the procedure, patients will have a cycle and right from that point, they’ll say that it’s lighter; less painful and they feel their energy coming back because they’re not losing as much blood, so the anemia’s not such an issue,” said Dr. Banerjee.

(WETM)- This weeks winner of the Jubilee Foods Rise and Shine Coffee Mug giveaway is John Kauffman of Bradford County.

If you would like to participate in the giveaway, enter here.

What local events are happening this weekend?

ELMIRA, N.Y. (WETM) - Looking for events for your family this weekend? Here is what's going on locally in the Twin Tiers.

On Saturday, February 27, the Acme Club in Elmira will be selling Black History Month soul food dinners 12 p.m. until all of the meals are gone.

The college partnered with the Food Bank of the Southern Tier to fight food insecurities at the college and within the community.

‘Get It Done’: Power pushing through your shoulder workout

Gov. Cuomo emergency powers bill could be taken up tomorrow 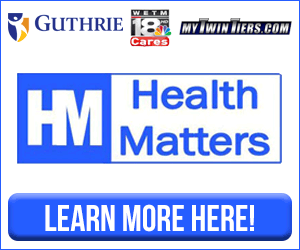 NYS: Speed the delivery of your tax refund by up to two weeks

Line to exit MPP program grows to 15,000 in less than two weeks