JACKSON, Miss. (WJTV) – Demario Davis plays for the New Orleans Saints, but was born and raised in Brandon, Mississippi. Not only did he record more than 100 tackles and four sacks this NFL season, he devotes much of his time to giving back to the community.

But what makes him so special in regards to African American history?

Well for one thing, where some athletes spend their money on materialistic items, Davis is proud to be a part of the philanthropy community. Statistics show that black Americans give back 25% more than others.

Davis is also proud to use his talents setting an example for young black males. Counteracting other statistics show that show 34% of African American males in the United States make up the total prison population.

At the begging of the NFL season, the Saints linebacker was fined more than $7,000 for wearing a “Man of God” headband. The league prohibits players from wearing gear that displays “personal messages” unless approved by the NFL.

His message spread like wildfire. People from all over the country, purchased the headbands. All of the money is going to St. Dominic’s. Davis appealed the fine and won.

St. Dominic’s said proceeds have totaled nearly $145,000. Before launching sales online, the hospital’s board of directors issued a million dollar match, dollar for dollar with Davis’ donation. That means $290,000 have been raised for the emergency room expansion.

Why travelers are getting a break on airfare right …

Watching for the Spotted Lanternfly

Watch Our Garden Grow: Keeping it simple with succulents

Community gathers for ‘Say No To Violence Rally’ …

What NASCAR at WGI used to be called

Click to Watch a replay of Dr. Coleman’s Political Pundit Night: Black History in America and the Twin Tiers: 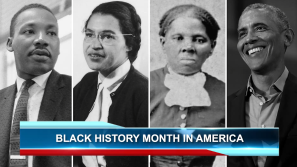 What are fossil fuels and when will they run out?