The Daily Pledge is brought to you by Steve’s American Lifetime Muffler.

HISTORY OF THE PLEDGE OF ALLEGIANCE

Thirty-one words that affirm the values and freedom that the American flag represents
are recited while facing the flag as a pledge of Americans’ loyalty to their country. The
Pledge of Allegiance was written for the 400th anniversary, in 1892, of the discovery of
America. A national committee of educators and civic leaders planned a public-school
celebration of Columbus Day to center around the flag. Included with the script for
ceremonies that would culminate in the raising of the flag was the pledge. So it was in
October 1892 Columbus Day programs that school children across the country first
recited the Pledge of Allegiance this way:

“I pledge allegiance to my Flag and the Republic for which it stands, one nation, indivisible, with liberty and justice for all.”

Controversy continues over whether the author was the chairman of the committee,
Francis Bellamy — who worked on a magazine for young people that published the
pledge — or James Upham, who worked for the publishing firm that produced the
magazine. The pledge was published anonymously in the magazine and was not
copyrighted.

According to some accounts of Bellamy as the author, he decided to write a pledge of
allegiance, rather than a salute, because it was a stronger expression of loyalty —
something particularly significant even 27 years after the Civil War ended. “One Nation
Indivisible” referred to the outcome of the Civil War, and “Liberty and Justice for all”
expressed the ideals of the Declaration of Independence. And Bellamy had hoped that the pledge would be used by citizens in any country.

In 1923, the words, “the Flag of the United States of America” were added. At this time it read:

“I pledge allegiance to the Flag of the United States of America and to the Republic for which it stands, one nation, indivisible, with liberty and justice for all.”

In 1954, in response to the Communist threat of the times, President Eisenhower encouraged Congress to add the words “under God,” creating the 31-word pledge we say today. Bellamy’s daughter objected to this alteration. Today it reads:

“I pledge allegiance to the flag of the United States of America, and to the republic for which it stands, one nation under God, indivisible, with liberty and justice for all.”

If you have a news tip or a correction to the story you can email it to us through this link. If you would like to send a comment to the author of the story, you can find their email on our Meet the Team page. 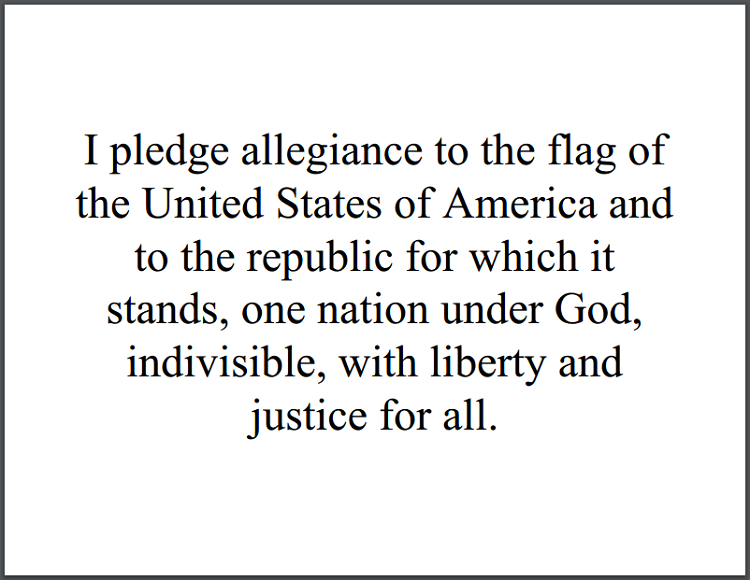 ELMIRA, N.Y. (WETM) - There is a lack of 24-hour emergency veterinary care surrounding the Elmira area, and pet owners are concerned.

When Tosha Purvis' cat got very sick, she got very worried. Particularly, because it was a weekend. As an emergency telephone operator, she knew there were no after-hour veterinary hospitals open nearby because she fields such calls all the time.

ELMIRA, N.Y. (WETM-TV) - Elmira Police have released an update to a fatal hit-and-run on the southside of the city early Wednesday morning.

ELMIRA, N.Y. (WETM) - A man is dead after he was hit by a truck in the City of Elmira early Wednesday morning, and police are looking for the driver.

Uptick in Car Break-ins Across Some Elmira Neighborhoods

State Police in Bath arrest woman for DWI; claimed to have swerved to miss a deer

Mostly Cloudy Precip: 8%
Close
You have been added to Evening Headlines Newsletter

Uptick in Car Break-ins Across Some Elmira Neighborhoods

Hampton Inn hotel coming to Hornell with a $15M investment